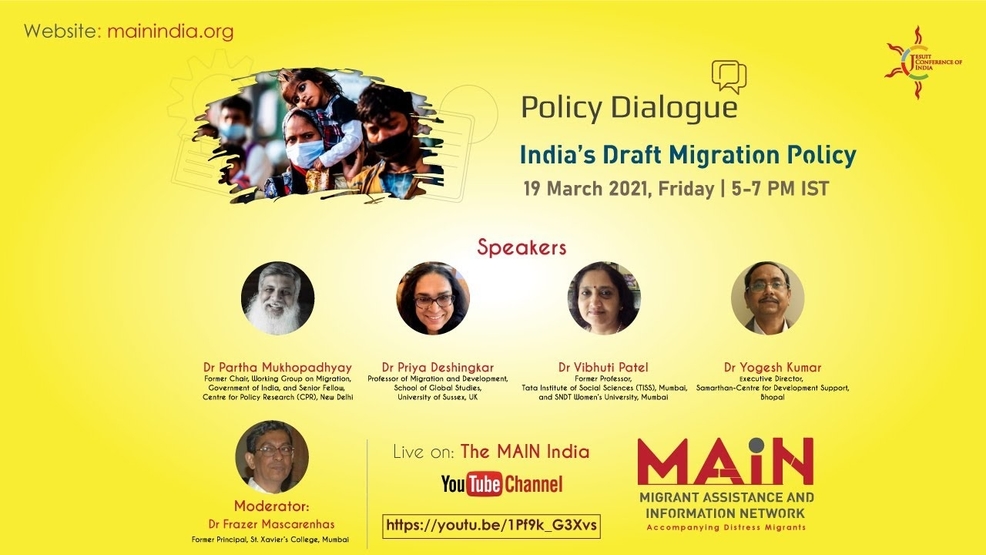 “If the migration policy is about special favors for migrants, then it creates a certain degree of resentment among the people who are locals, so, the trust of the policies should ensure that there should be no discrimination against the migrants”.

MAIN – Migrant Assistance and Information Network organized an online webinar discussion, a Policy Dialogue on India’s Draft Migration Policy, on 19 March 2021, Friday. MAIN is a new initiative of the Jesuit Conference (which has its remarkable presence in South Asian countries) and also of the collaborator’s networks. The participants of the webinar were from different parts of the world.

Dr. Frazer Mascarenhas former principal, St.Xavier’s College, Mumbai said, one of the abiding images of the 2020 and the pandemic is that 10 million Indian migrant workers walking home from one state to another over so many thousands of miles and kilometers to reach home because all public transport systems were closed and those were really heart wrenching series of images. India has a huge a portion of its workforce consisting of internal migrants who are from within the state and across the states. Also, commended on NITI Aayog for preparing a draft migration policy which is not yet public but has been announced in the parliament.

Dr. Partha Mukhopadhyay former Chair, Working Group on Migration, Government of India and Senior Fellow, Centre for Policy Research (CPR), New Delhi said, Migration is not about migrants alone and we need to think beyond migrants when we talk about migration policy. The census often records women moving along with families for reasons of marriage and if we look at the census it looks like the women are not part of the workforce and on the other hand when we question and find that the women participation in the workforce is higher than that of women who have not migrated, which means women who are recorded as migrating for non-work purpose, are actually working in the destinations. He also said, Migration is an activity and not an act which is a continuous process of movements from the village to city and this gives rise to multi locational households. He further added, if the migration policy is about special favors for migrants, then it creates a certain degree of resentment among the people who are locals, so, the trust of the policies should ensure that there should be no discrimination against the migrants.

Dr. Vibhuti Patel, former professor, Tata Institute of Social Sciences (TISS), Mumbai, and SNDT Women’s University, Mumbai said, how do we classify skilled, semi-skilled and unskilled labour. In the labour code, categorizing women’s labour and men’s labour has been a question, that why whenever any women do any work it becomes unskilled. She further said, Mahila Kisan Majdur Sanghatna has come up with several rapid assessment studies which shows unequal wages given to man and woman for work of a similar nature. She justified with examples that in the sugar belt agricultural areas of Maharashtra, one can get work only if they are in a jodi. In the jodi system only a man worker has identity. So, the woman who is not identified and not registered does not get any social security, social protection, accident compensation, etc and added to that, the women are sometimes asked to do hysterectomy because the employers do not want any disturbance due to menstruation, pregnancy or child birth. She further added, there are gross violations of human rights in the work place and the whole course of reproductive discourse is not even mentioned in any of the code. So, in every flagship program of government minimum 30% of quota should be for women and all kinds of social protections should be taken care by the helpline and it is also important to ensure the reproductive rights of women.

Dr. Priya Deshingkar, professor of Migration and Development, School of Global Studies University of Sussex, UK said, the remit of the policy is broad, seeking to bring even the most marginalised groups under its umbrella, however, a more explicit mention of important but less visible categories such as domestic work and home-based work, which are particularly important for women, is needed. She added, it is too easy for them to fall through the gaps as they are not adequately covered by protective law. For example, India has still not ratified the ILO Convention on Domestic Workers. She further said, we really need a more innovative approach to improve the effectiveness and cover of existing legislation and this can be achieved through consultation with stakeholders who are closer to migrants and work with them directly to pinpoint precise processes of exclusion.

Dr. Yogesh Kumar, Executive Director, Samarthan-Centre for Development Support, Bhopal said, there should be National Rural Migrants’ Inventory (NARMI) by GPs at source and by the municipalities but it is seen that the district centers have poor infrastructure that they cannot convert them into Migrant inventory level. It has to be much simpler where the incentives have to be there for the Migrants to register that they are migrating alone or with family for their work. He further said, one nation and one ration is only possible when we have a database at the panchayat and municipal level of all migrants who are moving from place to place.